Update on the Cheng Guancheng Ordeal. 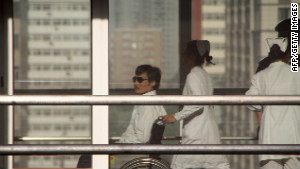 The Cheng Guancheng fiasco just gets worse.  Here are some of the more recent developments. Here is Secretary Of State Hillary Rodham Clinton's statement about Cheng.


"I am pleased that we were able to facilitate Chen Guangcheng's stay and departure from the U.S. embassy in a way that reflected his choices and our values. I was glad to have the chance to speak with him today and to congratulate him on being reunited with his wife and children.


Mr. Chen has a number of understandings with the Chinese government about his future, including the opportunity to pursue higher education in a safe environment. Making these commitments a reality is the next crucial task. The United States government and the American people are committed to remaining engaged with Mr. Chen and his family in the days, weeks, and years ahead."

Who wrote this Hillary or the Ministry of Truth from 1984?


Now read the story located here at the Daily Beast:


This excerpt casts a different light on the ordeal:


When U.S. officials escorted him out of the U.S. embassy shortly after 3 p.m. Wednesday, Chen thought he’d extracted a promise that at least one of them would stay with him at the hospital, he said. “Many Americans were with me while I checked into the hospital and doctors examined me. Lots of them,” he told me from his hospital bed, where he’s being treated for broken bones in one foot, an injury sustained when he fell after climbing a wall during hisdaring escape from house arrest late last month. “But when I was brought to the hospital room, they all left. I don’t know where they went.” The ordeal was all the more bewildering because Chen is blind and was hurt during his escape; he needs crutches or a wheelchair to move around.


Here is the most important excerpt from this story:


The State Department insists that blind Chinese activist Chen Guangcheng left the U.S. Embassy of his own volition Wednesday and that U.S. officials in Beijing did not convey threats to harm his family by Chinese officials, as Chen claims.

"At no time did any US official speak to Chen about physical or legal threats to his wife and children. Nor did Chinese officials make any such threats to us," said State Department Spokeswoman Victoria Nuland. "U.S. interlocutors did make clear that if Chen elected to stay in the Embassy, Chinese officials had indicated to us that his family would be returned to [their home in] Shandong, and they would lose their opportunity to negotiate for reunification."

Nuland was responding to accounts by Chen supporters, now repeated by Chen himself to the Associated Press, that said Chen was pressured into leaving the embassy via threats to the safety of his wife and family. Chen told the AP that U.S. officials told him the Chinese would take his family back to their home province in Shandong, where they had been under extrajudicial house arrest and in some cases physically abused, if he didn't leave the embassy.

Why is the State Department now so vociferously defending themselves against the thought that they had conveyed threats to Cheng?  I am reminded of Shakepseare's Hamlet when Gertrude said, "The woman doth protest too much methinks."


If one reads between the lines however, it is clear that the message conveyed by embassy officials to Cheng most likely was taken as a threat by Cheng, since the home that they were being returned to is the place where Cheng and his family were subjected to persecution and abuse.


Ultimately this fiasco illustrates one of two possibilities.

Either one of these possibilities sends the clear message that Obama is incompetent and needs to be defeated in November.