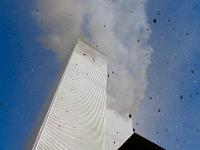 It is the fourth anniversary of 9/11. I just finished watching a documentary of what happened on UA flight 93, the flight that went down in Shanksville PA. The documentary shows the passengers trying to retake the plane before it is crashed into someplace like the World Trade Center or the Pentagon. The passengers and crew on that plane were heroes. They were the first to sacrifice their lives in the War on Terror.

As I watched this film all of the feelings about 9/11 returned to me. The fear and disbelief did not go away for a long time. I don't think anyone knew what to think or believe. But make no mistakes, what happened on 9/11 was the first acts of War against democracy and freedom. Al Qaida and Islamic fundamentalists would like to supplant the free countries of this world with a theocratic government that would take away the freedoms of all people. These people are EVIL. They will not stop until they are eradicated from this Earth.

America has recovered from 9/11. America has taken the fight to the terrorists. President Bush has correctly acted by overthrowing two governments that sponsored and supported terrorists.

We cannot allow terrorists to threaten freedom and democracy. Our Government has acted correctly. I stand with those who are fighting in Iraq and Afghanistan to stop these evil people. I honor those who have made the ultimate sacrifice in protecting my freedom.

I have not forgotten. I will never forget.